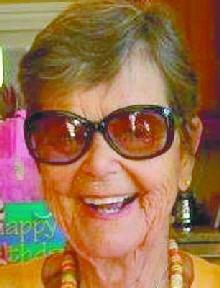 O'Donnell, Patricia Lang 07/05/1926 ~ 04/03/2015 SAN DIEGO -- Patty O'Donnell, wife of the late LtGen Andrew W. O'Donnell USMC, died on Good Friday surrounded by her children. She is survived by Kerry and Rick Kruger of Katy, TX, Jody O'Donnell of San Diego, Barby and Frank Harvey of Houston and MajGen Andrew W. O'Donnell Jr. USMC and wife Kelly of Quantico, VA. She had eight loving grandchildren to whom she was known as Tutu; Tricia Kruger Gittemeier and husband Joel, Andre Kruger, Blake Hayter, Katie and Allie Satterwhite, the late Drew Satterwhite, and Andy and Isabelle O'Donnell. She was also proud of her two great-grandchildren, Campbell and Carter Gittemeier. Patty was of the "old school" where women were the matriarchs of the family. As a Marine Corps wife of 39 years and a Marine Corps mother of 35 years, she was Always Faithful. She had been a resident of San Diego for 21 years but her heart remained in Hawaii where she and her husband Andy had enjoyed retirement. Today we wish her...Much Aloha. Services to be held April 27th at 1:00pm at Pacific Beach Presbyterian followed by a reception at White Sands of La Jolla. In lieu of flowers, donations may be made in her name to The Assistance League of San Diego or The Semper Fi Fund.

Posted by KarylMiller at 9:57 AM

Email ThisBlogThis!Share to TwitterShare to FacebookShare to Pinterest
Labels: Patti_ODonnell

So sorry to announce our good friend Patti O'Donnell has died. She lived in Pacific Tower for almost 20 years till she moved 8 months ago into White Sands.  Her daughter Kerry just called me. Patti had been in severe hip pain and walking was becoming a chore. She had hip replacement surgery March 30 and was planning to recover at the V, but they never released her from the hospital because her vital signs were iffy.  She was 89.

Memorial service will be Monday,  April 27 at 1 PM, Pacific Beach Presbyterian followed by a reception at White Sands.

In lieu of flowers, donations may be made in her name to The Assistance League of San Diego or The Semper Fi Fund.
Karyl
Posted by KarylMiller at 10:01 AM